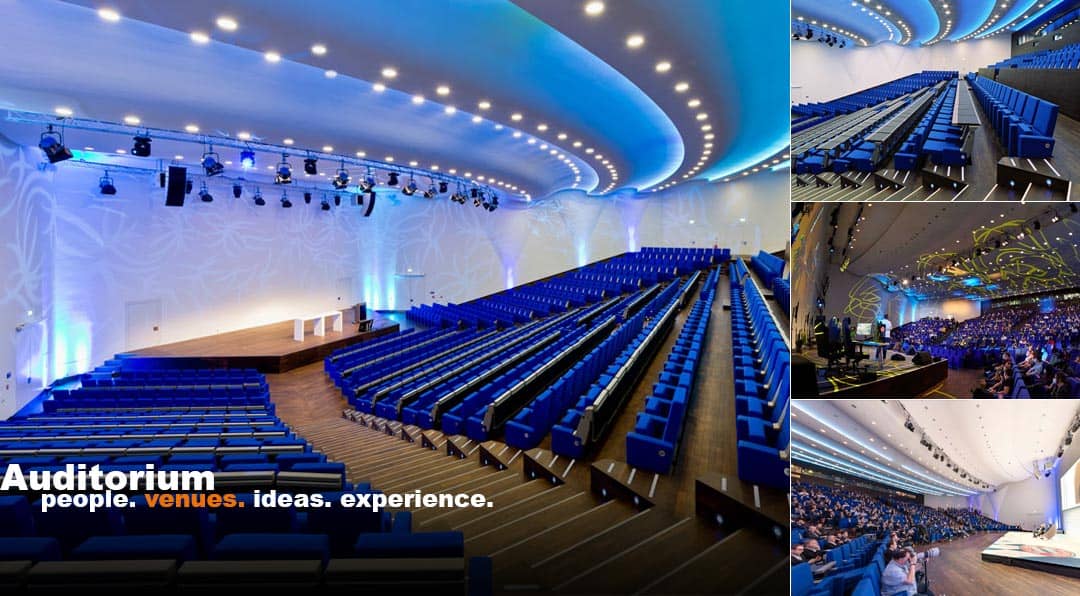 The Auditorium, almost modestly, foregoes the add-on “Maximum” although it is the audimax (Latin for biggest auditorium) at the CCD Congress Center Düsseldorf. In fact, this is the only thing the room foregoes – a room that embodies the elegance of a Bel Etage thanks to its exceptional architecture, acoustics and furnishings, and one which captivates visitors with its aesthetics and atmosphere alike.

Built in the style of a classical amphitheatre but with a modern twist: On three levels, which rise in an arc-shaped manner, expanding and opening the view into the semicircle with each row of seats. This sense of open, breathing space is reinforced by the concentrically curved ceiling, which creates spatial lightness and liveliness. The colours and characteristics of the lighting strips embedded in the ceiling are freely scalable. Combined with the possibility of using the hall walls as a projection surface, they give the room an ambience and aura that are unique – inspiring, impressive and yet approachable from any seat. For despite a maximum seating capacity of 1,028 people, the Auditorium thrives on the short visual axes all the way up to the top tier – and acoustically, too, the Auditorium follows the example of Greek amphitheatres.

Quality in design, comfort and innovation that is among the best that seating has to offer worldwide: When the auditorium was refurbished in 2006 and given its current furnishings, Düsseldorf Congress opted for furniture care of Figueras, a company whose seating systems are synonymous with seating comfort of the highest level worldwide. For example, at the UN, the White House or the LaSalle College of Art in Singapore. They are all equipped with seating that is hand-upholstered in Barcelona. And by the way: each of the 1,028 royal blue seats in the auditorium has a fold-out table and its own power outlet

No mission impossible? You bet!

13 February 1981 saw the Auditorium undergo its baptism of fire when the very first “Wetten, dass…” prime-time TV show was broadcast and started its triumphant march from here. What followed was a long series of major events of the most diverse kind: from classical concerts such as those of by Stuttgart Philharmonic Orchestra, political party conferences, and international congresses with simultaneous translations into ten languages to major stand-up comedy events, which were staged here as “Big Mouths for Big Halls” in cooperation with Kay and Lore Lorentz. And the auditorium has also experienced some very “odd” performances. For example, the DEG ice hockey players skating in on a specially iced stage surface. Or an evening of Chinese artistry, for which an oversized piano lacquer stage was specially built.

The sports world is also prominently featured here on a regular basis. Since 2011, SPOBIS, Europe’s largest sports business congress, has been held annually in the Auditorium (and in the entire CCD). Over two days, it brings together the crème de la crème of top-class sport, sports rights marketing and the industry. The auditorium is bathed in a completely different light and ambience when the stage opens for DoKomi, the Japan convention that attracts up to 55,000 anime, manga and Japan fans to the Messe Düsseldorf grounds and the rooms of the CCD.

The range of such diverse events from business, politics, culture, sport and showbiz could scarcely be wider. The requirements profile calls for clear acoustics – and where better than in the auditorium?

Further information on the Auditorium 360° view