The new Exhibition Centre in Düsseldorf’s district of Stockum opens boasting a total of 112,500 m² gross hall space. Under the name MKC (Messe-Kongress-Center) two congress centres (Süd and Ost) are built with 20 rooms for 1,200 participants. Special features of the congress centre Süd are both its location right by the River Rhine and the characteristic honeycomb structure of most of its rooms.

On 14 February 1981 Room 1 hosts the first ever “Wetten dass…?” game show with Frank Elstner. Over the following two decades eight further shows are to follow. 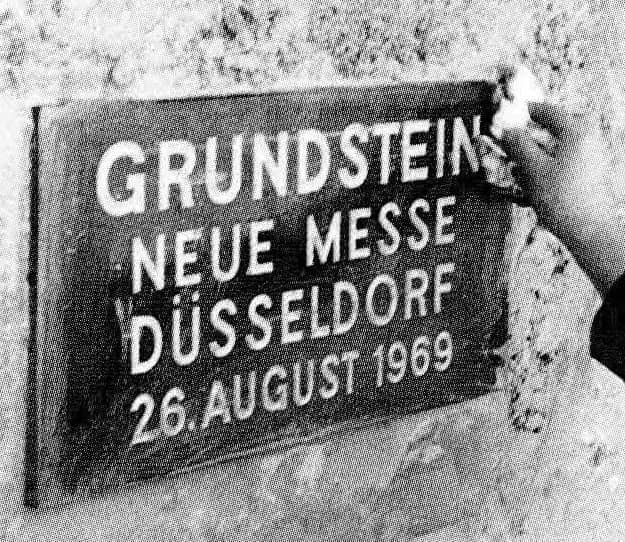 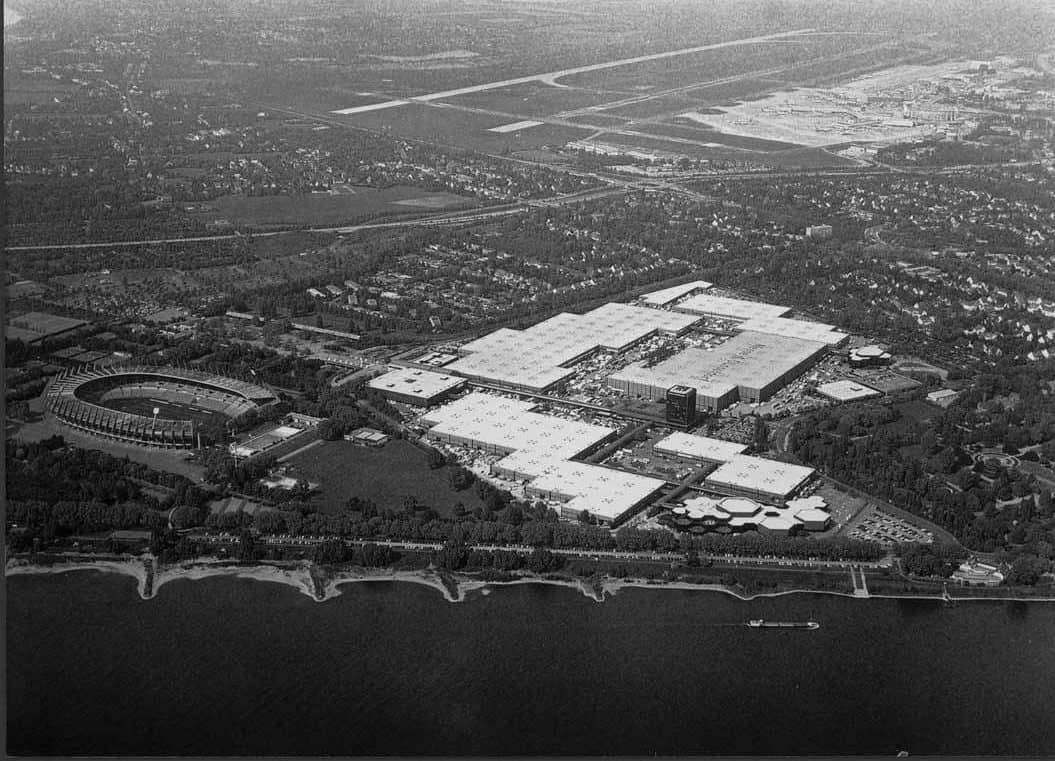 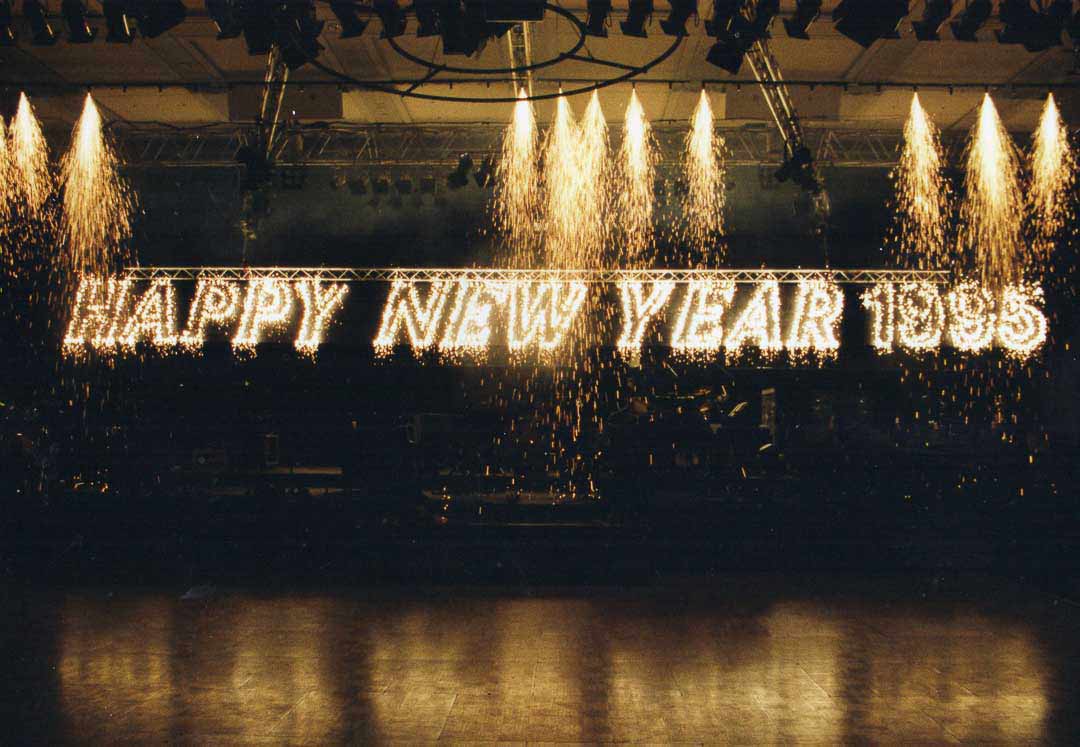 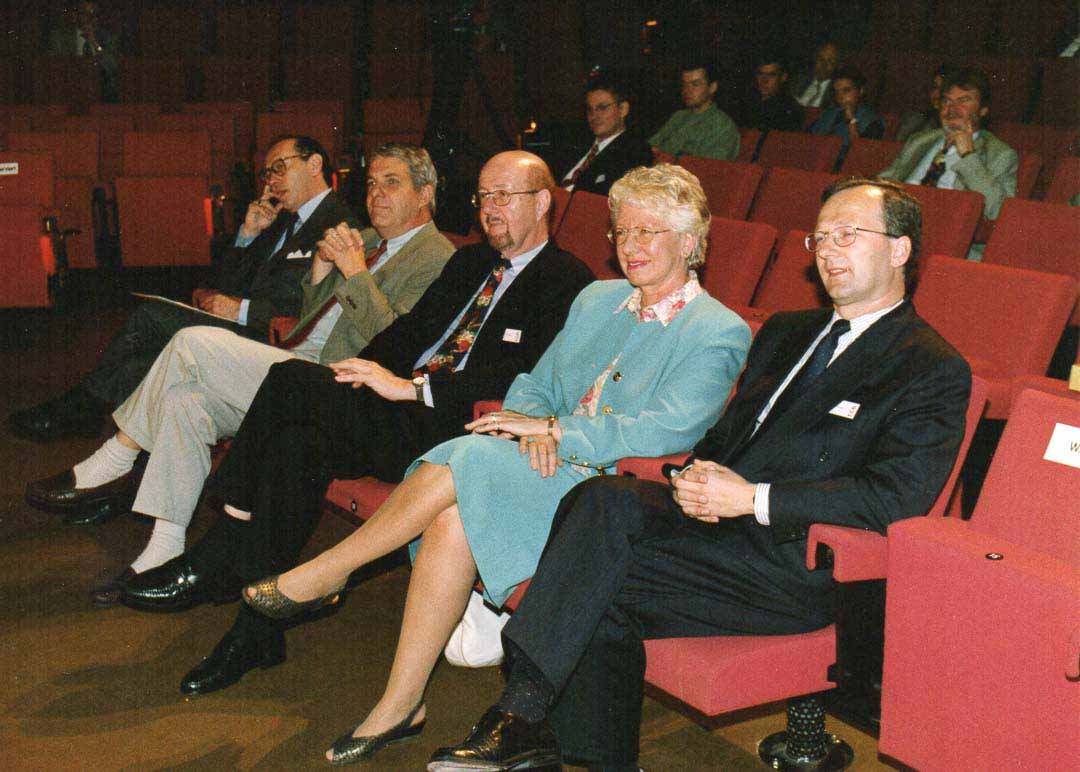 Early this year the company called “CCD Congress Center Düsseldorf GmbH” starts work. The founding father of the GmbH realised the importance of the MICE industry for the development of the North Rhine-Westphalian state capital early on. 1994/95 sees the inauguration of the new municipal hall boasting direct access to CCD Süd and exhibition hall 3 with the holding of a New Year’s Eve gala. From this point on the venue regularly hosts international congresses and major corporate events in Düsseldorf. To this end, great importance has been attached to in-house technical equipment and highly skilled lighting, sound and media technicians.

Capacity of the complex was substantially extended with the addition of the biggest hall seating 2,600 and a range of 30 rooms. So from this year on congresses such as the “World Congress of the International Society for Cardiac Surgery”, the “World Congress for Family Therapy” and the “Annual Meeting of the German Urologist’s Society” were hosted here for the first time.

CCD also offers its customers interesting perspectives at the recurring annual events such as the Henkel Annual Meeting, the Congress of the German Ophthalmologists’ Academy, FOKO (the Congress of the Federal Academy of Gynaecologists) or the Master craftsmen celebrations of Düsseldorf guilds.

The turn of the millennium brings new and bigger dimensions. The company was renamed “Düsseldorf Congress & Veranstaltungsgesellschaft mbH” from which time it operated the legendary Philipshalle venue, renamed to Mitsubishi-Electric Halle in 2011. Since the 1970s this hall has staged all the big names in rock and pop culture – from AC/DC, the Rolling Stones to LED Zeppelin all renowned artists of the day have performed here. From the turn of the millennium the hall with its capacity of approx. 8,000 people has also been marketed for corporate events.

Furthermore, 2001 saw the opening of exhibition hall 6 (also marketed as the RheinHalle) as the first multi-functional hall. This meant not only a broadening of the trade fair’s portfolio but also a venue staging concerts by such mega stars as Elton John, Luciano Pavarotti or Byran Adams. To make this possible the hall is equipped with a black-out system, grandstand seating, green rooms and seminar rooms. Beyond this, Hall 6 hosted a World Volleyball League match. 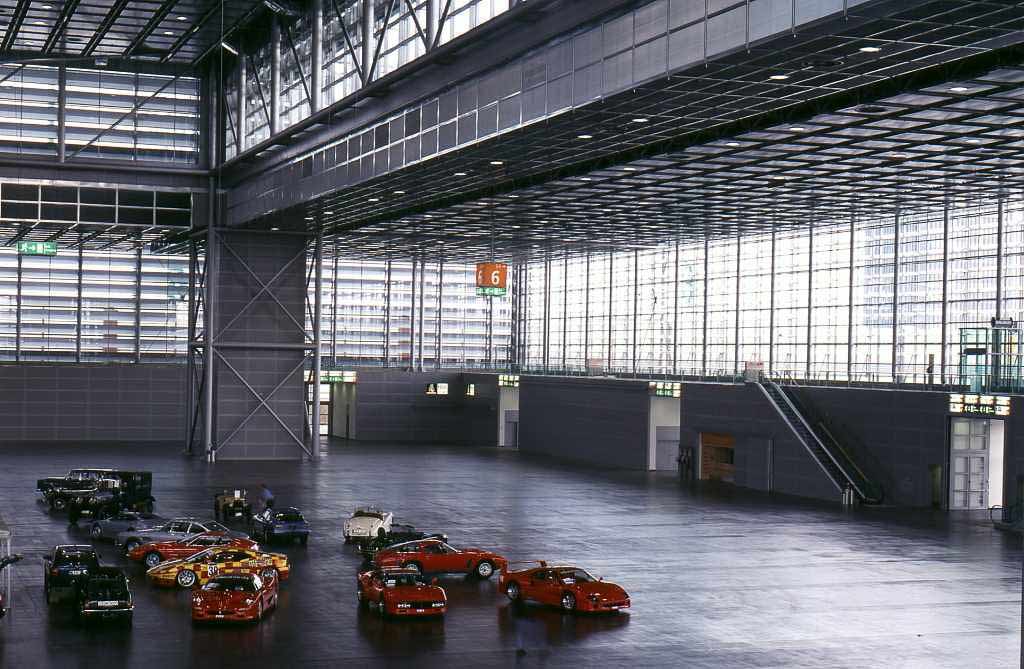 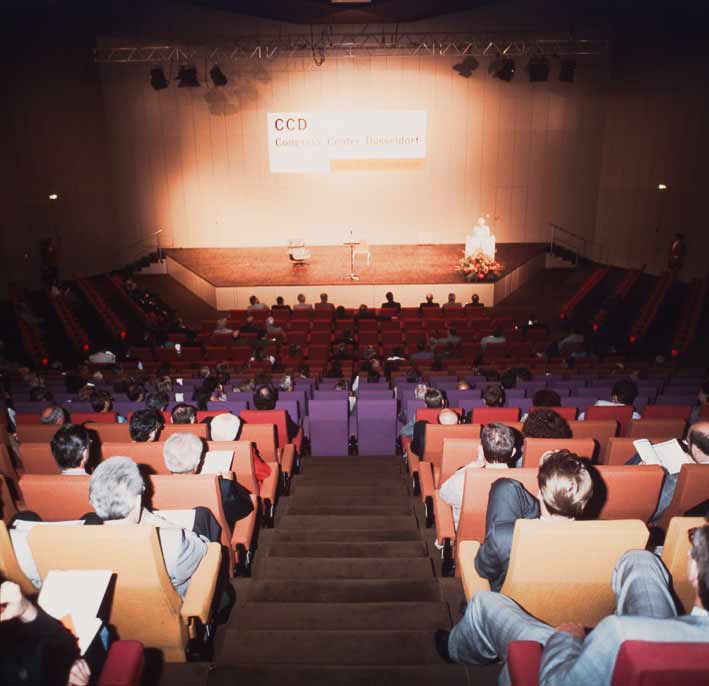 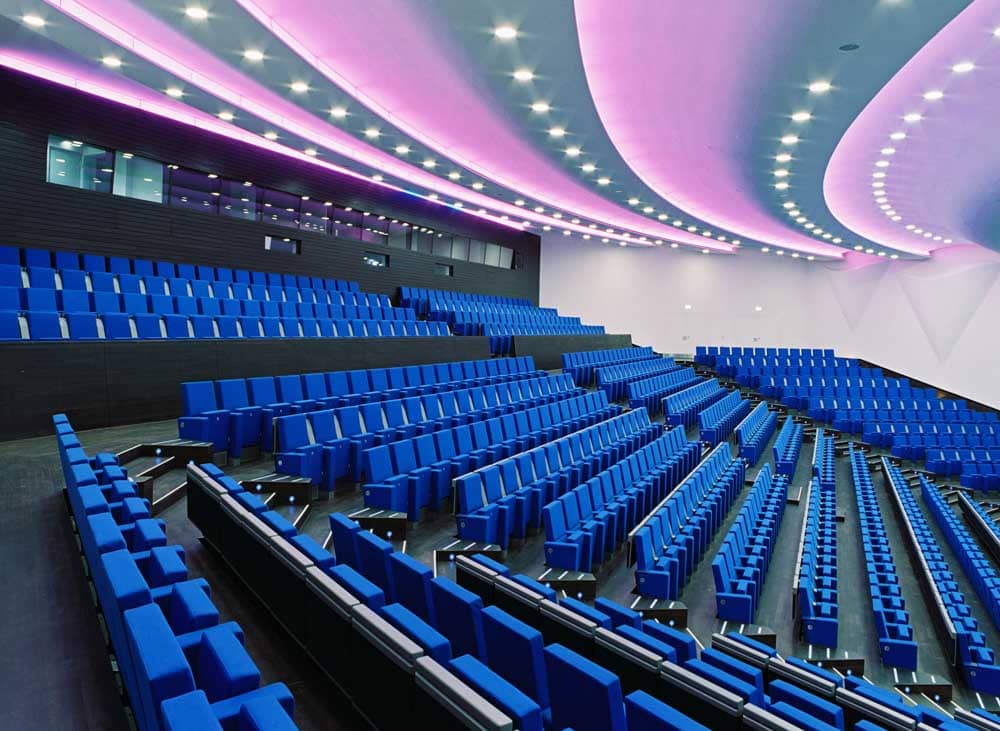 The Robert-Schumann-Saal in the re-built and newly opened Museum Kunstpalast is a premium venue for about 800 persons, which was also marketed by Düsseldorf Congress from 2001 to 2004. From 2004 to 2018 the company also marketed venues at the airport (Modul E and Station Airport).

In 2004 Room 1 at CCD Süd underwent comprehensive refurbishment and now boasts special lighting technology that puts people centrestage. Special features of this room include its lighting and sound system plus theatre seating along with its iconic honeycomb structure. 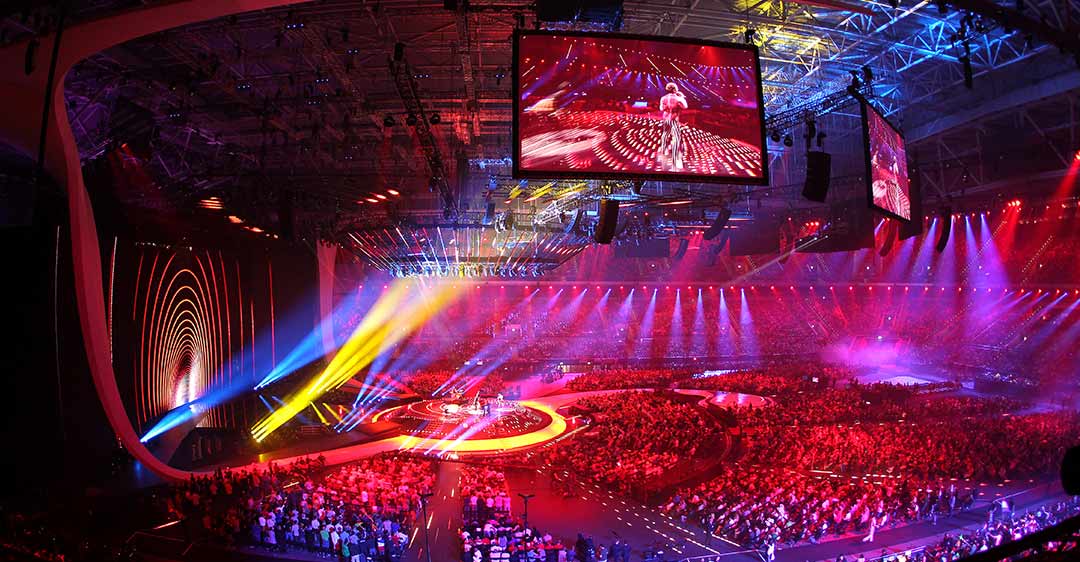 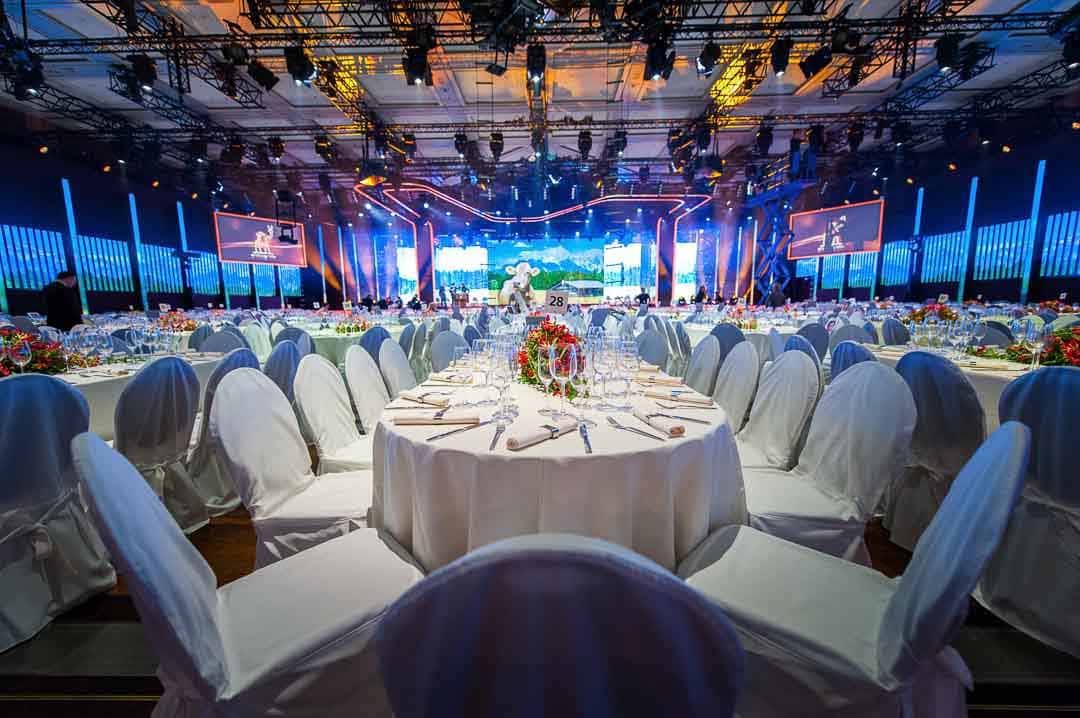 In 2005 both the arena (then still called the LTU Arena) and the newly built exhibition hall 8 (today’s Hall 8a) were added to the portfolio. The Arena holds 60,000 people, serves as a stadium for the national league club Fortuna Düsseldorf and boasts a closable roof, indoor heating and a rapid blackout facility. These features succeeded in bringing the world’s biggest TV show, the Eurovision Song Contest (ESC), to Düsseldorf in 2011. Over three days a total of 100,000 visitors were welcomed to four shows; around the globe some 120 million TV viewers watched the contest. Including stage building and dismantling this international mega event occupied the Arena for six weeks.

A second Arena – the ISS Dome – was built in Düsseldorf and opened in 2006. This multi-purpose hall, also host to the home matches of the city’s local ice hockey club “DEG”, is special because the ice rink can also be covered for concerts and shows. Just as special is the elliptical shape of this venue with a capacity of approx. 13,000 people.

In 2008 Düsseldorf Congress joined forces with Düsseldorf Marketing und Tourismus to establish the “Convention Bureau”, a central port of call for all those planning events in Düsseldorf. On top of this, Düsseldorf Congress opened an office at Düsseldorf’s Heinrich-Heine University to assist academic staff in their preparation of congresses.

2011 saw Düsseldorf Congress take over the operation of CASTELLO Düsseldorf, a hall seating 3,300 people in the south of Düsseldorf and hosting TV shows and handball matches.

CCD Congress Center Düsseldorf continues to welcome a plethora of key congresses such as the 25th ECTRIMS Congress but also star-studded galas: the BAMBI Award gala in 2007 brought movie stars like Sophia Loren and Joachim Fuchsberger or adventurer Felix Baumgartner to the city. In 2009 the first European Youth Day of the New Apostolic Church was held at the exhibition halls and CCD.

Over this year we added to our expertise by holding such large and extraordinary events as the “Sprinter Eurotraining” by Daimler Benz, an alumni event by McKinsey, the “Deutscher Sparkassentag” (German Savings Bank Day) and the second Bambi Award gala. After taking over the City of Düsseldorf’s sports agency – which we subsequent renamed “Düsseldorf Congress, Sport & Event GmbH” – sporting events were also hosted here like the Gymnastics World Championships at the Mitsubishi-Electric Hall, the Table Tennis World Championship in 2017 in the exhibition halls or the “Grand Départ” of the 2017 Tour de France 2017 in front of the exhibition centre (including installation of the press centre at the CCD and a mobile VIP marquee on the parking lot). And even the congress business is becoming more international: the company opened up to the Chinese market by successfully organising such events as the presentation of that nation’s Hunan Province to the European audience. Germany’s Anime and Manga Convention “DoKomi” – which started as a small gathering at CASTELLO Düsseldorf – already made an initial move to the CCD Congress Center Düsseldorf in 2012. Counting over 50,000 visitors it has now been held on the exhibition premises since 2016.

Sustainability has already been on the radar for Düsseldorf Congress for a long time. As early as in 2013 CCD Congress Center Düsseldorf was one of the first congress centres to receive the Green Globe Certificate, an internationally recognised environmental and sustainability seal. Later, the “fairpflichtet” symbol and the “Düsseldorf Ökoprofit” label followed for individual venues. 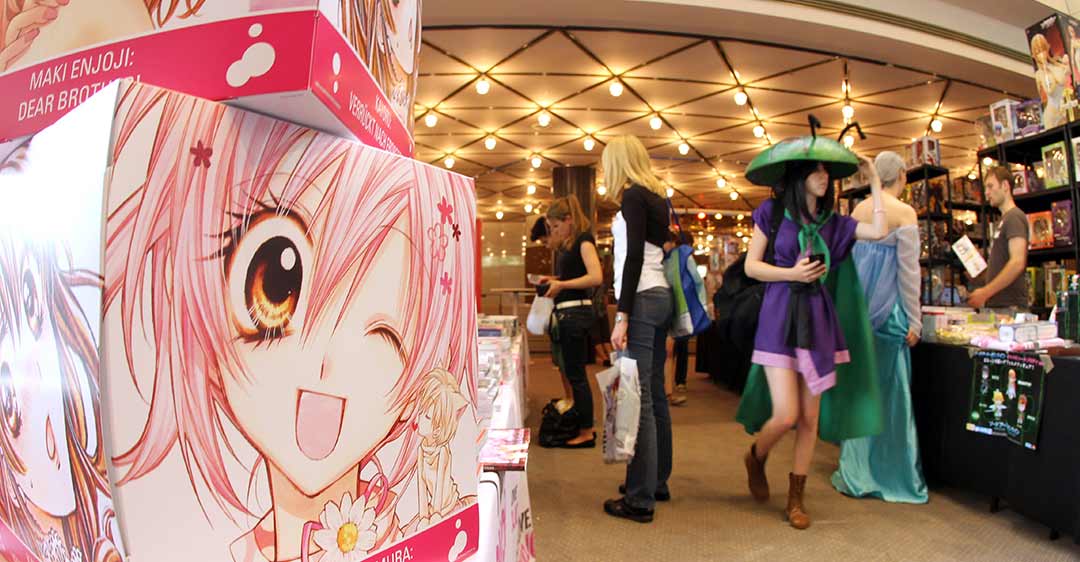 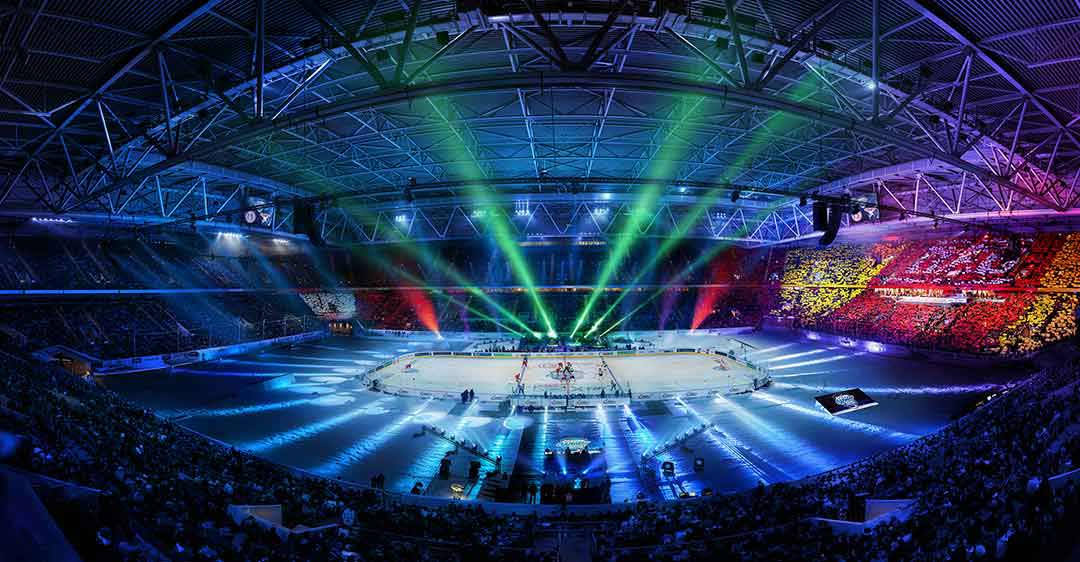 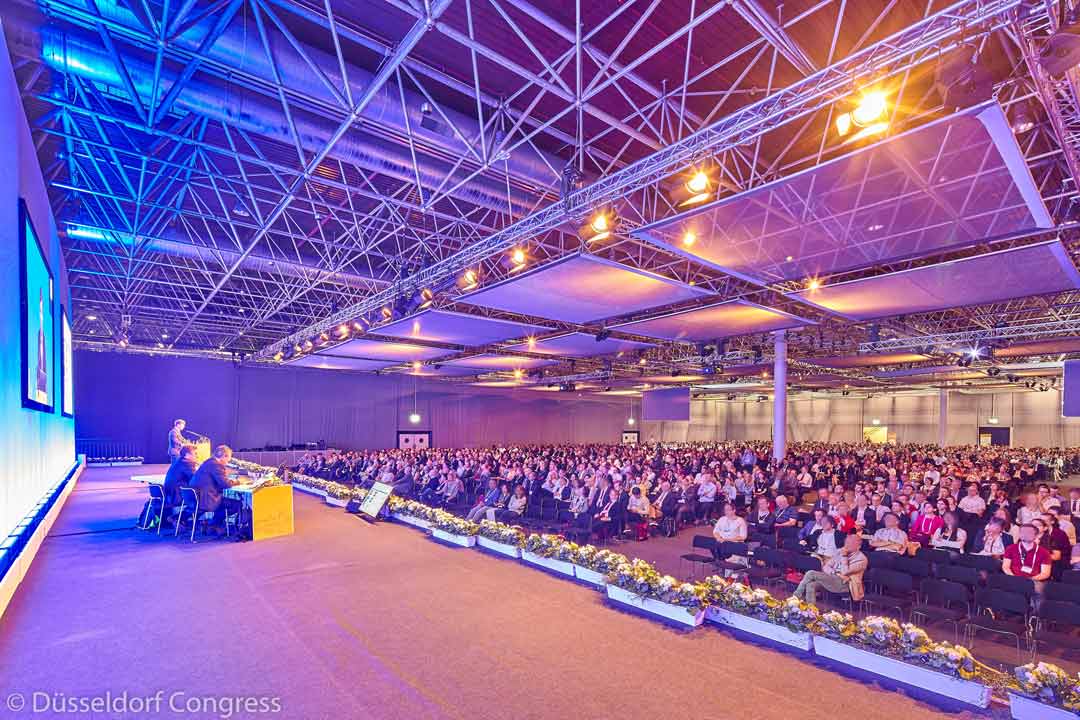 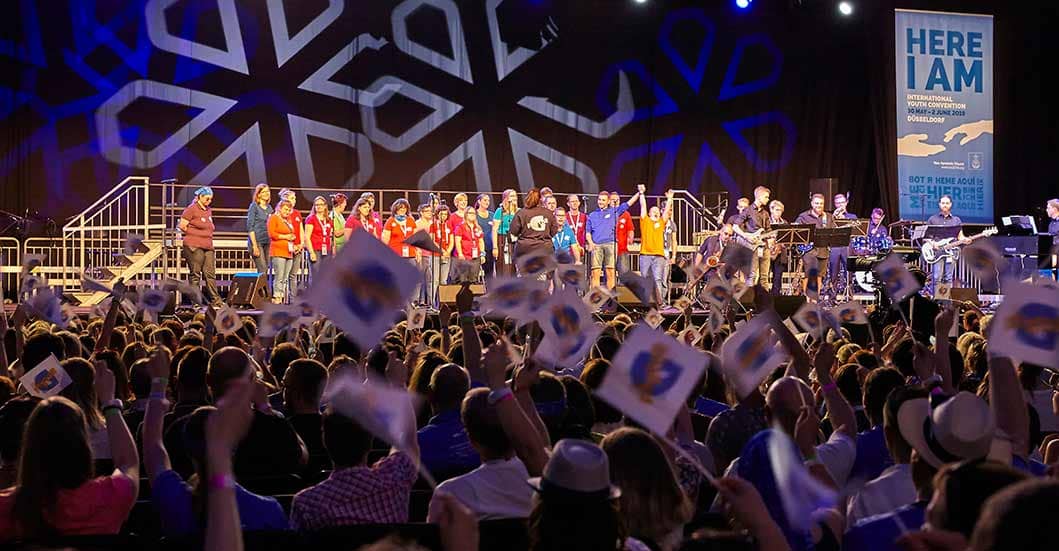 The EANM Congress is the leading event in the field of nuclear medicine alternating between several venues including Barcelona, Vienna, Berlin, Hamburg and hosted in Düsseldorf in 2018. Some 6,000 physicians from all over the world meet to exchange ideas at the CCD. Halls 8a and 8b were host to an entirely different community at the CONNECT-Festival. Held in Düsseldorf for the first time, this music event brought together the international avant-garde of the electronic music scene.

Considered one of the highlights of 2019 is the International Youth Day of the New Apostolic Church (IJT). Over three days some 30,000 young people celebrated a cheerful and peaceful festival in a very special atmosphere across the entire fairgrounds and CCD plus the Merkur Spiel Arena. Three exhibition halls welcomed the guests from 105 nations who were able to stay overnight, freshen up at a custom-built shower village and party on five open-air stages across the exhibition halls and the Arena. Likewise, the European Fencing Championship in Halls 8a / 8b caused a stir both in the press and among fans.

Our highlights of the last 25 years.